Last time, well, was some time ago, wasn't it?

I have been holding off posting this devlog to let some things happen so I could post about the BIG NEWS (remember that?).

Does that mean now is the time for the BIG NEWS?

All the moving parts haven't quite lined up yet, unfortunately, and the BIG REVEAL of the BIG NEWS will have to wait a little bit longer. Although, if you happened to be in the right part of the internet last weekend, you might just have found out...

Stick with me anyway as I try to remember what's been goin' down in Turbo town over the past three weeks. 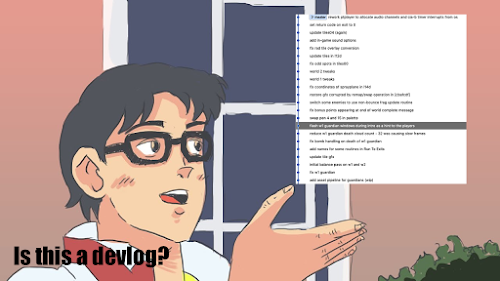 Continuing on from last time, the first two worlds were polished up some more. No major changes, but an iterative process of playing levels, tweaking something, then replaying the level again and again and again...

I redesigned one level in world 1 (Up The Garden Path) as the level exits would never line up with the old design and it just looked bad, adjusted some tilesets, improved the world 1 guardian experience, fixed bugs and so on.

It's at the point now where I've mentally "signed off" world 1 as being complete, apart from dropping in new tilesets as they come in. Hurrah? Hurrah!

The sound system got some improvements too. First, I added sound options to the in-game menu. Surprisingly, getting the sound system to recognise dynamically updated settings was much trickier than actually adding the menu options, which bodes well for reusing that menu code in the title screens.

I also modified ptplayer to use AmigaOS to allocate the audio channels and CIA timer interrupts, instead of not allocating at all and hitting the vectorbase directly. I'd been putting this off for a while, because scary CIA code y'know, so it was good to cross it off the list.

I posted my modifed ptlayer here, in case it's useful, but note that it's based on ptplayer 5.3 and at the time of writing 5.4 isn't far from release. It's also probably not entirely OS-friendly (but it is OS-friendlier). I can't support this code, but now it's out there maybe someone will be able to make use of it.

The next thing I'll do will be to update my ptplayer to the 5.4 beta version I've received from the author. World 2 will get the finish and polish treatment after that.

Something I'm considering is removing the continues limit. At present, players can continue the game a limited number of times after losing all their lives. The plan would be to remove the limit but reset the player scores and stats (speed, strength etc.) if continue is selected. As a side effect this would free up some space in the HUD and allow me to add a progress bar of some kind to show how many enemies are left on the level - a small annoyance I've picked up on during playtesting. TBC, but I think it's more likely than not that I'll do it.

I leave you with this thought. Why don't I have a powerup called KRAKATOMATO?