Last time, well, who can remember that far back? Let's just crack on, shall we?

So it's been a while. Let's just say that September, October and November were particularly busy and genuinely real-life shocking and traumatic months for me personally, and outside events took precedence over working on Turbo Tomato. 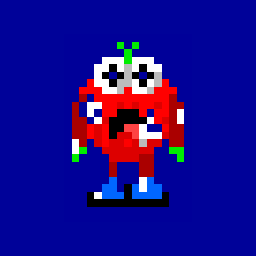 But here it is, almost Christmas, nobody's allowed to have fun, and I'm starting to look at the game again. Let's do a montage and ketchup.

September saw a number of further bug fixes and improvments to various subsystems in the game. Random number generation was overhauled to use a faster and more modern algorithm, and the module replayer saw an upgrade to the latest version. Bombs, progress meters and blitter waits all got improvements too.

Somewhere in this month I also released Dodgy Rocks for classic Amiga systems. As with all releases, and even with Rob doing all the heavy lifting, this took more time than expected; I even made an online high score system for it! The game was well received though and even got some streamer coverage from AmigaBill.

October actually started well enough, with a rare week off work spent almost entirely on polishing World 2 (The City) and fixing the numerous bugs this uncovered.

October was also diet month for Turbo. I had been testing on an A1200 configuration out of sheer laziness, but in this month I finally switched to the target 1Mb chipram A500 setup and had to spend a little time squeezing and reorganising the game in to that configuration.

Further squeezing was required after some discussion with Bitmap Soft, the publishers, where we agreed that the game should be released on one floppy. Given that Amiga floppies hold 880Kb and the game was approaching 2Mb of content this was no small ask. This work was actually quite time consuming research and testing, and continued on in to November as well.

Outside events meant I took most of the rest of October away.

World 2 and compression works continued when I returned to the game.

After much trimming of fat (almost-duplicate levels and enemy types for the most part, so no great losses), and judicious use of Shrinkler and Zopfli compression to replace the aged RNC ProPack, Turbo Tomato now just about fits in to the 880Kb target. I'll not be too strict on the target size now until the game is almost finished. This is to allow me to add all the necessary content for the remaining two worlds and trim it back from there, rather than trimming prematurely.

Two worlds? Yes. World 5 is gone. It had just one level, the final boss fight, which is now at the end of World 4 instead. The World 4 boss was barely implemented and the design (from the 90's, and my 20's) somewhat insenstive, so this was an easy decision to make.

World 2 Guardian WIP
The World 2 guardian required a lot of work. It was originally a multi-stage affair, but I wasn't happy with it at all and ended up just keeping the first stage. Handily, this saved a lot of disk space as well.

World 2 is now at the stage World 1 was back in September when I signed it off in my head. It may see some further balance tweaks, especially if I have to cut more enemy types to save space, but it's mostly finished. Hurrah!

Again, I only managed a couple of weeks out of the month with progress on the game.

Life? Don't talk to me about life.

Somehow, it's December, and Christmas, with its distractions, is looming in the way that it does. Changing situations should leave me with more free time to work on the game though, and I'm in the right headspace again too, I think, so I am hopeful of making more progress.

Realistically I'm not now going to hit my original target date of January 2021 for releasing Turbo Tomato. It was something of an arbitrary date in any case, comfortably far away and aimed at having boxed editions ready for the Amiga Ireland show, which is now cancelled because of the ongoing pandemic situation.

I hope to have the game done by the end of January, with a further 4-6 weeks lead time after that to produce the physical editions for release. So perhaps mid-March?

Doable? Let's see. Now that's an easy segue in to a montage sequence if ever there was one.